Do you remember the old Reese's Peanut Butter cup commercials.  You got chocolate in my peanut butter.  You got peanut butter in my chocolate.  Two great tastes that taste great together.  Well, recently I got PLN in my game and I got game in my PLN.  The verdict: Great together!

I have always liked games.  I teach video game design.  I am working on my doctorate in game based learning.  Apparently, there are many other educators who like games!  They are out there and using games to encourage learning opportunities as well as networking with other like minded educators.  Interestingly, I have come to find that many members of my in game PLN were not always gamers.  In fact, I have recently become fascinated with the concept of 'point of entry' when it comes to people's foray into games.  If you could, please post a comment and let us know your story about how you got into games.  There are some pretty great stories about how people accidentally found themselves playing games. 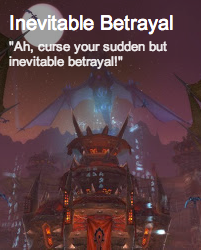 In this article I will focus on World of WarCraft and mix in a little plug for Clash of Clans.  These are the two games that make up my in-game PLN.  World of WarCraft is a Massively Multiplayer Online Role Playing Game (MMORPG).  Sounds geeky to those of you who are unfamiliar, but is a second home to many.  Essentially, the game allows players to complete quests, earn experience, gain items (gear) to improve their character, and take on virtual professions.  This is a very simple explanation.  The game is deep and has an incredible fan base that has turned the game into quite a phenomenon.  In fact, the second largest wiki (second only to wikipedia) is WoWWiki, currently boasting a total of 98,182 pages.  WoWWiki is a wiki (collaborative website where users contribute content) that covers every aspect of the game imaginable.  I could go on and on about the game, but I'll save that as my intent here is to talk about the Educational Networking possibilities to be found in the game. 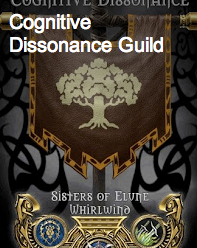 World of WarCraft, as an MMORPG is a social game.  Players can group up to complete quests, work through in game content, and socialize.  In order to truly capitalize on the social aspect of the game, players typically join a guild (essentially a team).  Members of the guild work together to earn special guild achievements, share resources, and enjoy sharing in the gameplay experience.  There are guild comprised entirely of educators that game.  World of WarCraft is made up of two factions, the Horde and the Alliance.  On the Alliance side, the guild, Cognitive Dissonance formed as a group of educators that game and wanted to play and learn together.  After some time, the Inevitable Betrayal guild formed on the Horde side for the same reason.  These two guild are considered sister guilds and many members have Toons (in game characters) in both guilds.  In game, guild members play together while mixing in professional conversation.  I played World of WarCraft for years and stopped playing because I felt I did not have time to play.  Perhaps a bigger part of the reason was that the idea of an affinity group was lacking.  Last summer I met +Laurence Cocco at #ISTE12 and then I met +Peggy Sheehy, +Knowclue Kidd, and +Lucas Gillispie at the Games in Education Symposium.  They clued me in to the Cognitive Dissonance guild and I knew it was time to get back in the game.  After all, I devoted a lot of time to cultivating and nurturing my PLN on twitter, EdWeb.net, and Educator's PLN.  The idea of networking with like minded educators in game was more than appealing.  I joined Cognitive Dissonance and Inevitable Betrayal and can't emphasize enough how happy I am to have found my 'tribe' as many people in the guild refer to our affinity group.  Everyone in both guilds is so nice, helpful, and welcoming to new members. If you are an educator and interested in gaming, I encourage you to join our in-game (and out) PLN.  The in-game networking has expanded outside of game as the guild members are involved in so many exciting projects, including the Games Based Learning Mooc and G.A.M.E. (Gamers Advancing Meaningful Education).  These groups hold regular webinars and a Wednesday night tweetchat (#gamemooc) at 9pm EST.  I look forward to meeting many guild members at upcoming conferences including #ISTE13 and GLS9.0 (Games+Learning+Society conference).

Recently, there has been a spinoff of the Inevitable Betrayal Guild that has begun playing Clash of Clans together.    Our guild name is Invtbl Btryl and we welcome new educators to join us.  There have also been spinoffs of the guild in GuildWars2.  I have a feeling it won't end there.  Feel free to comment on other games that would lend well to an extension of the Educators' guilds and further nurture collaboration (and FUN) for the educational community. 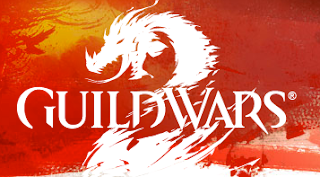 Are you a gamer?  As I mentioned earlier, I would love it if some of you could share your experiences as members of a guild, particularly a guild comprised of educators and more specifically, please share your 'point of entry' - How did you get here?

** UPDATE
Some people indicated that they had difficulty posting comments or the story of their 'point of entry' into MMORPGs.  Trish Cloud (@trishcloud) was kind enough to post a comment on google+ so I will include it here.

"I started playing WoW about 2 years ago. Unlike many in our tribe I don't have alot of experience with NES, Sego, etc. I remember when Pong came out and I sucked at it. I was also terrible at Tetris, Frogger, Space Invaders etc. So I pretty much determined that I was not a gamer. Until 2 years ago I saw commercials for it and I began to wonder what it was like. You didn't use those handheld devices, you did it with a keyboard and mouse and I thought hey I can do that. So I got a friend to join it with me. Needless to say I was hooked. I was not part of a guild that instructed like IB but I was in a guild made up of some high schoolers we know. Great kids, One is at Savannah College of Art and Design now, the others attend Philip O Berry Academy of Technology here in CMS. But I digress, I learned pretty well and eventually got my paladin up to 75, but I was lured away by SWTOR.Then last summer via Twitter I heard about the Games MOOC. Well let's just say that's all she wrote. I've gotten back into WoW via Cognitive Dissonance and now Inevitable Betrayal. My gameplay is better than ever. I've learned TONS about game theory and how to use games in the classroom. Learned much about different types of games, and best of all, earned the status of "Cool" with my daughters (10 & 13) and my students at the school I work at. ﻿"
Posted by Games and Learning at 10:53 AM